e. Menura supurba is an interactive artwork that explores the paradox between our fascination with the exotic, and our potentially dystopic future devoid of many animal species. The work hybridises seventeenth to early twentieth century aesthetics with refined post-consumer waste materials, to create a simulacra of a Lyre bird.

The Australian Lyre bird (initially designated Menura superba) have the remarkable ability to mimic sounds, giving it one of the most complex calls of any bird. The male uses these calls to attract a mate. Lyre birds have been documented mimicking camera shutters, flute and piano melodies, even chain saws.

In this work a repertoire of calls are used to attract an audience, inviting people to come closer, and inspect patterns in the bird’s intricate plastic plumage, which is back lit by an array of 35 tri-colour LEDs. This Lyre bird is also attracted by colour, mimicking not only sound, but also altering its plumage colour to reflect those worn by the audience it attracts. Face recognition software enables the work to recognize people, move the bird’s head to track their movement in the room, and record clothing colours for inclusion in its ever-expanding repertoire of plumage displays.

When Enlightenment scientists worked to discover, study and preserve exotic fauna and flora found in the new world, they probably did not intend this knowledge to enable destruction of the environments they explored. However, indications of this potential were evident as exotic creatures were prized mainly as taxidermy specimens for display as curiosities, or symbols of wealth and status – trophies of travel to distant lands.

The vocal range and unusually long, wispy tail feathers made Australian Lyre birds a nineteenth century curiosity. As taxidermy specimens, they were the most prized of all Australian birds.

The Lyre-bird’s vocal displays are known to include other bird calls, and sounds generated by human activity such as camera shutters, flute and piano melodies, car alarms, mobile phone ringtones and chain saws. Beyond it’s value as a curiosity, Lyre-birds’ calls are a gauge of our acoustic environment, as they mimic sound pollution – an often-overlooked interaction between humanity and the natural world.

The combination of antique and technological aesthetics featured in this work draws attention to these practices, and their impacts on our future. We wanted to make a bird that looked like it had ‘put itself together from bits of waste it found in its environment’. The work was inspired by concepts relating to our relationship with animals and the natural environment in Philip K. Dick’s Do Androids Dream of Electric Sheep (Blade Runner). In that novel one’s humanity was marked by a care and concern for other species, as opposed to the anthropocentric markers of Humanism.

The head of the sculpted bird moves up and down and from side to side, using quirky head movements. The sculpture is equipped with facial recognition and tracking software to directs these movements. A sense of intelligence results from these two simple elements, as the bird appears to recognise faces, at times looking directly into one’s eyes. This behaviour becomes especially pronounced when it sees people wearing colourful clothing. Other behaviours include becoming nervous around large groups of people, or distant and moody when ignored. The impact of these characteristics is endearing. We have observed people showing different coloured objects to illicit different plumage patterns. Many also try to touch, stroke or even kiss the bird. 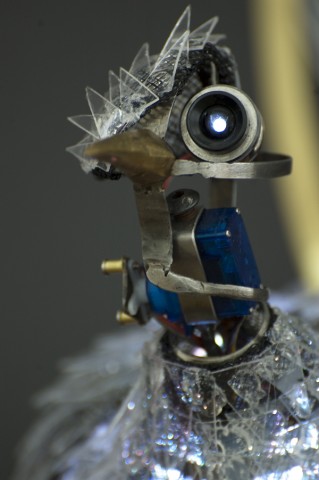 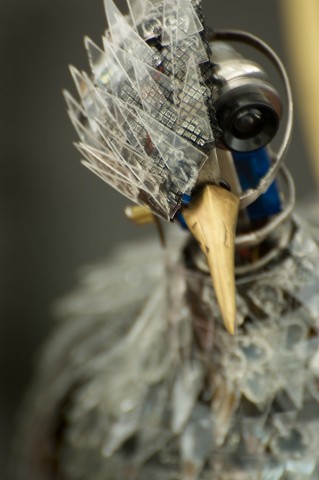 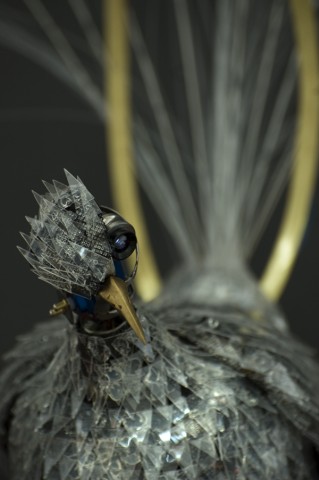 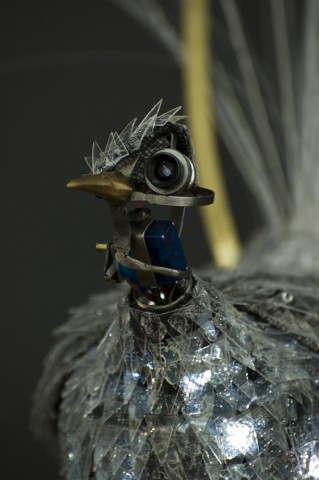 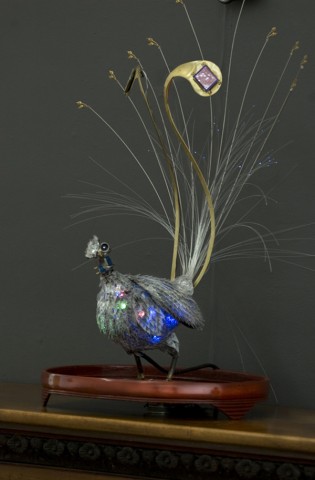 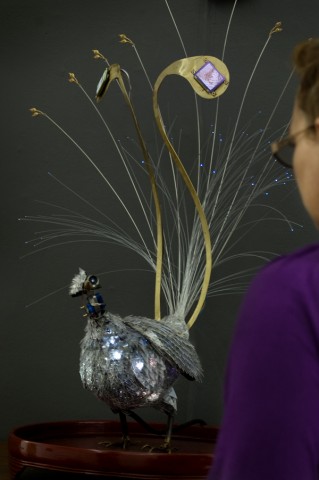 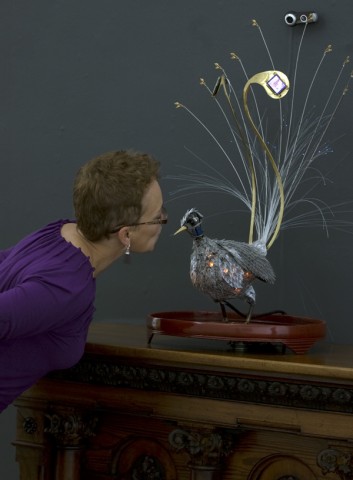 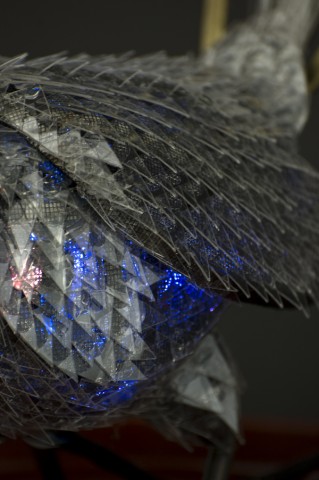 e. Menura Superba also records images of the audience for later use. The artwork uses these images to recall colours of clothing, however, they are also a valuable documentation of audience interaction. The images below were taken during the ISEA 2009 Exhibition in Belfast. Many images contain people wearing distinct clothing. In one image a person is showing the bird yellow shopping bag. Some photos show people who are not wearing colourful clothing. It is likely these people have looked at the work for a length of time, attracting the bird’s eye. e. Menura Superba is a Kuuki Production, and was realised by: 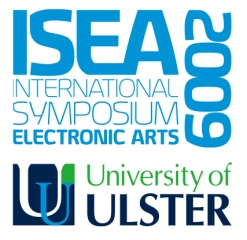 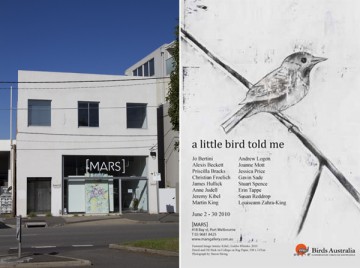