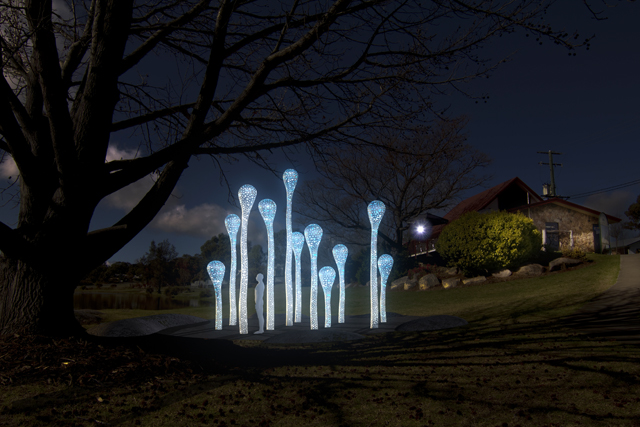 Concept Render of the work at night with the Granite Belt Tourist Information Center in the background.

Artist Statement: Entering the Stanthorpe region we were struck by how dramatically the landscape’s colour palette changed. The dry colours of the east coast’s dry sclerophyll woodlands were replaced by foliage that was strangely warm in this very cold place. Everything seemed softer and more refined.

We visited Stanthorpe on a stormy, wet, weekend in August. We went to Girraween in between two massive showers of rain. Stepping out on to the granite area that marks the beginning of the walking tracks, the landscape’s visual contrast had a visceral effect on all of us. There were black and white contrasting spots on the rocks, whilst tiny white and coloured wild flowers stood out against darker foliage. All around there were layers and layers of tiny spots of contrasting colour, giving the landscape a sparkling effect. We found it quite dizzying and disorienting. Our 6-month-old son Arki squealed with delight, waving his arms and kicking his legs for quite a long time. 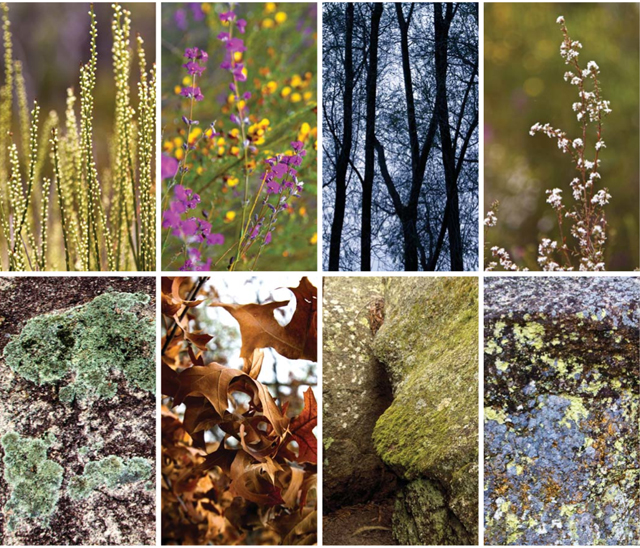 Reference Images taken during our research visit to Stanthorpe. Photographs by Gavin and Priscilla.

Rare wildflowers
As lichen leaches acids into the granite stone found throughout the Southern Downs region, it slowly breaks massive boulders down into smaller rocks. Tiny, extremely rare wildflowers take root in the soil that forms in these cracks. It seemed amazing to us that this harsh, unlikely environment should be the only place in the world that these flowers survive.

Inspired by stamen of a rare wildflower found in the region — Grevillea scortechinii, the artwork’s lighting displays will be embodied within a cluster of sculptural ‘light poles’. The forms seek to emulate the attractive properties of the stamen, drawing viewers in while responding with varied intensities of light with touch and proximity. 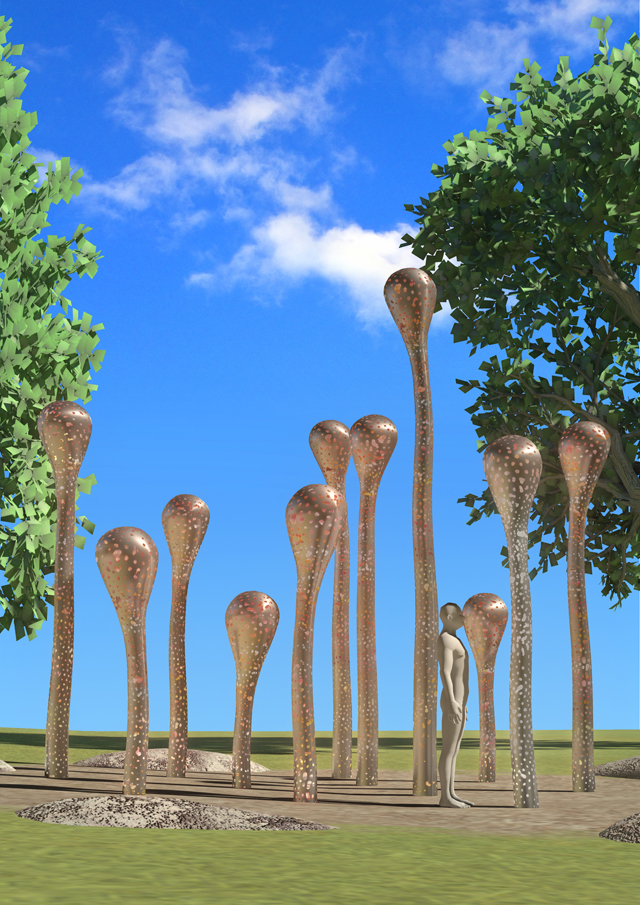 Render of the work, daytime.

During Concept Design we played with subtle changes in scale, placement and proportion through a series of working models and computer renders, seeking to capture the delicacy and inviting beauty of the wild stamen. During Design Development we will further develop and refine the artworks sculptural form.

Artist Statement: We tried to capture the magical, sparkly appearance of the Girraween landscape. The holes cut in the stems of each light pole mimic the patterns of granite patina. These holes will contrast pin-pricks light against the surface of the sculpture. 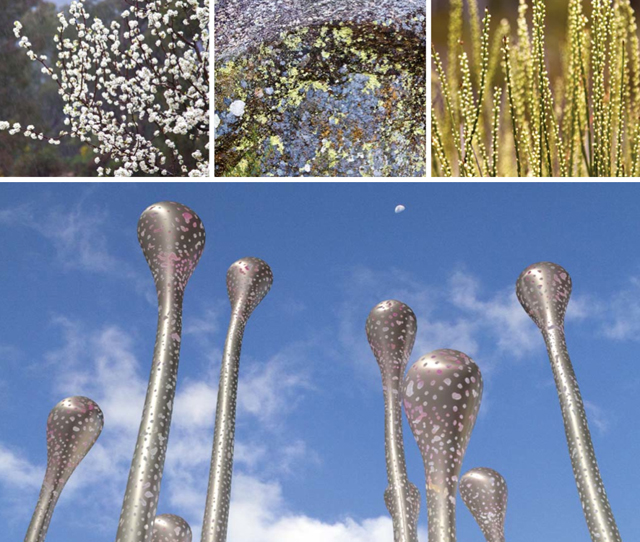 Source images for patternation, and detail render of the work during the day.

The artwork’s etched and pin-pricked surface designs capture the natural patterns found throughout Girraween’s landscape, referencing the organic patinas Kuuki discovered on granite surfaces and the glistening foliage and flower patterns they encountered just after rainfall had occurred.

Animations generated from climate data, further activate the work’s surfaces through colour, light and movement. The nature of these animations will be refined during design development after further visits to see the site, and following discussions regarding available data from the Bureau of Meteorology 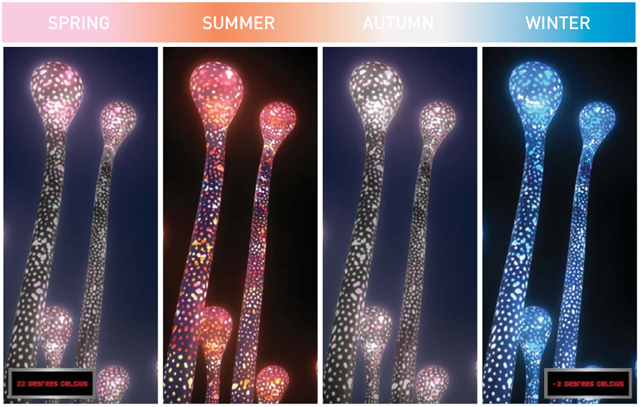 Possible pallete for changes of illumination across the seasons

Real time weather data from the Bureau of Meteorology will stimulate unique and evolving light patterns in the artwork. For example, the lights may flicker during times of extreme wind, show particle effects when snow is predicted, cycle up or down as barometric pressure rises and falls, and ‘bloom’ with the fruit blossoms in spring with the white and red of apple, apricot, peach and cherry trees. During the day, the reflective surface of the white brass material chosen for the artwork, will reflect the changing palette of the sky and surrounding environment as time passes from morning to afternoon, and through the seasons.

The proposed piece is an interactive lighting work that records and poetically displays real time weather and temperature data using patterns of colour and light. An intuitive colour code enables people to ‘read’ the temperature at a distance, while an embedded LED text display will provide the exact temperature and details of historically notable weather events.

The artwork will be augmented by an interactive touch screen in the Visitor Information Centre. This will provide a real time visual display of temperatures recorded at the site and a historical overview of temperature variations in the region. 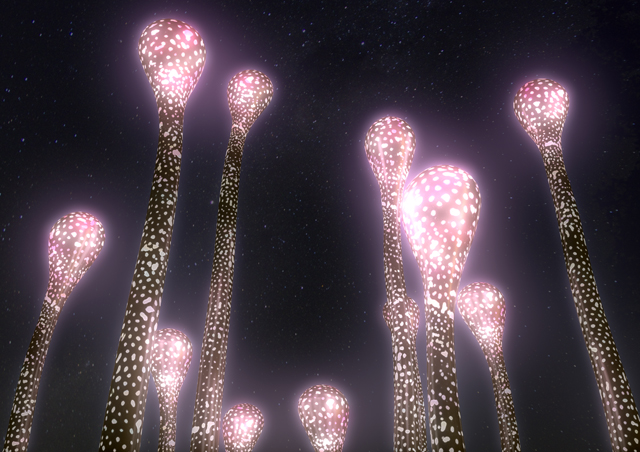 Detail of the work at night.

Visitors will also be able to physically interact with the artwork. The lights will become noticeably brighter in response to proximity, with an often surprising interplay of light and pattern between the poles immediately surrounding a person.