We’d like to wish you a Happy New Year for 2014. The Luna New Year – the Year of the Horse – begins on Friday. After such a lovely holiday, Australia Day and Luna New Year feel a bit like the unofficial start of the Australian working year.  We hope you are feeling happy, well and refreshed after a bit of a break. To ease you into the groove, we’ve put together some eye candy from projects that kept us busy recently.

Thank you for your interest in our practice. We wish you the very best for 2014.

New work from the studio – the Guilt Disposal Unit 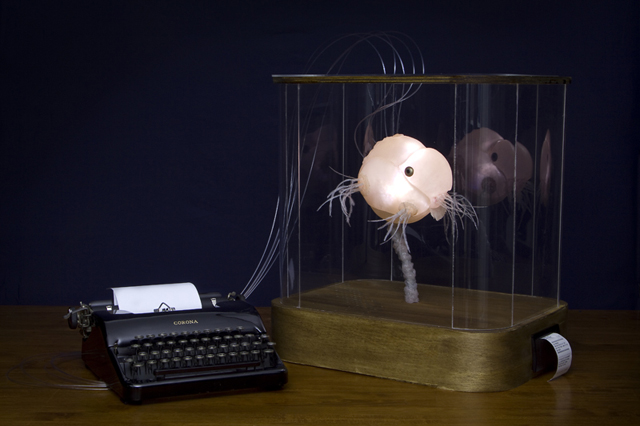 We’ve been having fun in the studio making some new works which will soon be ready for exhibition. These works continue in the same vein as the robotic lyrebird e. Menura superba, and the internet searching crickets Suzumushi. Our favourite so far is the Guilt Disposal Unit – a creature that consumes guilty secrets typed on an electronically modified typewriter, and offers penance for absolution in the form of a small printed ticket. Our initial inspirations for this work included humanity’s complex psychological responses to climate change, the Welsh sin-eater tradition, Douglas Adam’s concept of the electric monk, and Priscilla’s catholic upbringing.  Read More.

Kuuki’s first app has been published on the App Store 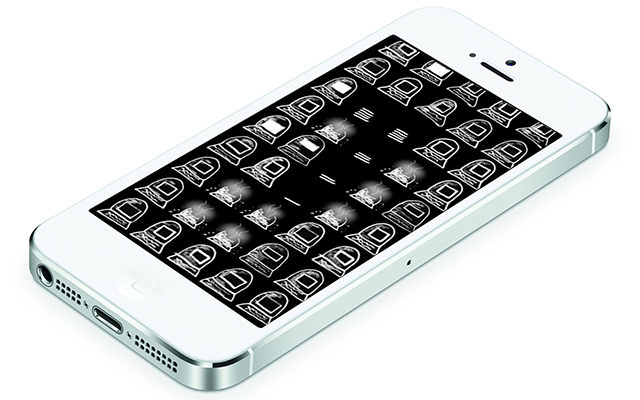 This week we published our first app on the Apple App Store. The Open Plan is an iOS version of a scene from our 2006 project Charmed. Have fun smashing computer screens and scattering piles of work in the wind. Childish yes, but also satisfying in a bubble-wrap popping kind of way.  Watch this space for more apps from Charmed. If you are feeling playful and would like to smash some computers, download the free app.

In the week before Christmas we put the finishing touches on The Acacia Light Wall, a permanent public artwork commissioned by the Hamton Group for it’s residential development, Eden on the Yarra. The work consists of two separate walls – one 12 x 3 metres, and the other 10 x 3-5 metres. It features a stylised laser cut screen inspired by tangled tree branches. The work provides a nightly light show of colours similar local plant flowers and foliage. Colours and patterns change fortnightly to mark the passage of time and progression of the seasons. Visit the work each evening after sundown at 677 Victoria Parade, Abbotsford, Melbourne. Read More 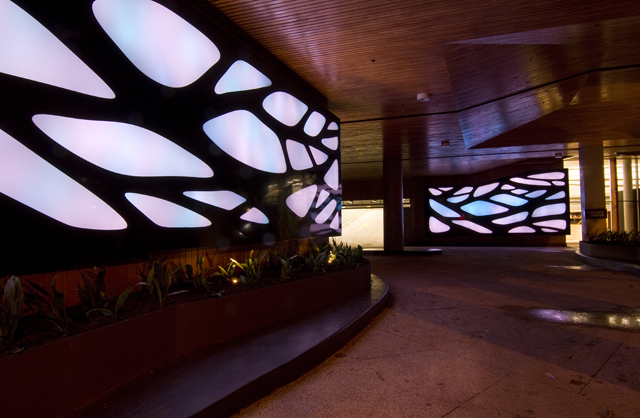 Our robotic lyrebird ‘Ernie’  – or e. Menura superba as he is officially known – will return to Brisbane shortly as part of the Experimenta Speak to Me – a touring exhibition of electronic artworks from the 5th International Biennial of Media Art. Dates and venues for the show will be announced shortly.